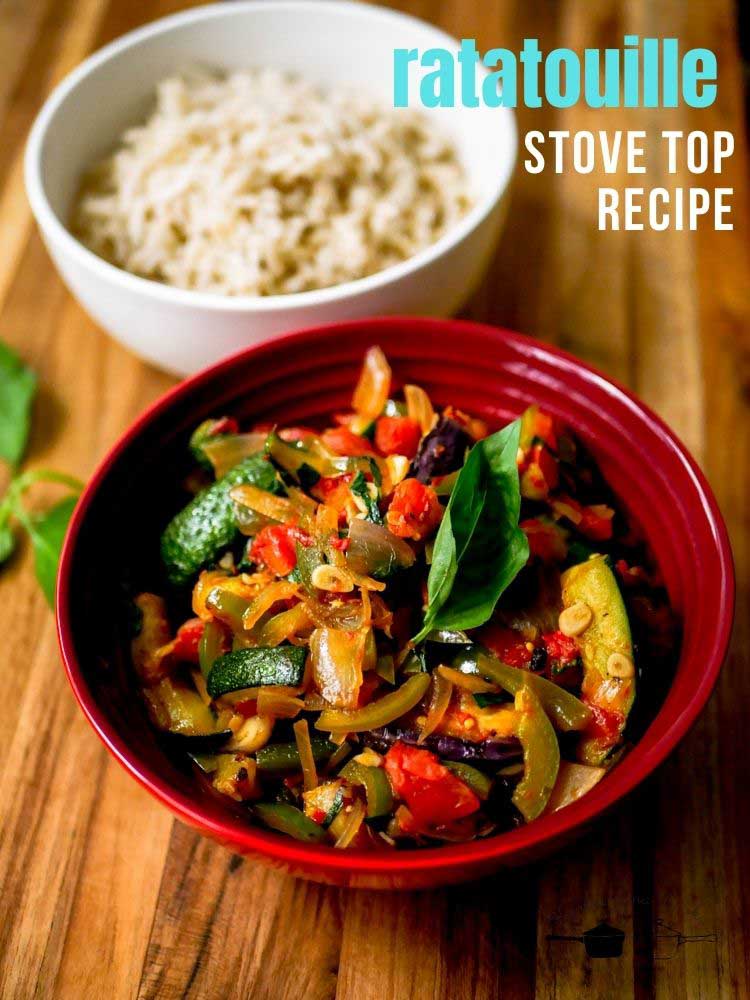 I have used the Indian Brinjals / Eggplants for making the Ratatouille today. The regular eggplants will work just fine. I like the taste of small eggplants in this recipe. Use whatever you can get hold of. Traditionally, the bigger variety is what is used. Cut the eggplants into two inch pieces. Cut the Zucchini into two inch pieces too. Add them to a bowl. Add a teaspoon of salt and mix well. Place the veggies on a strainer. Let it sit for 30 minutes. The salt will take out some of the moisture and the vegetables will be concentrated in flavour and very tasty.

Heat a couple of teaspoon of extra virgin olive oil in a pan and add in the zucchini and eggplant. Do not crowd the pan. Stop with just one layer. Cook for 3-4 minutes. The zucchini and eggplant should be brown on the edges and soft. Remove and set aside on a plate. Repeat with the remaining veggies. The key to this recipe is to get a nice char on the veggies. So take your time and cook the veggies in batches.

In the same pan add in the finely chopped garlic and the dried herbs. Saute the garlic and the herbs for a few seconds. Add in the sliced onions and saute for 3-4 minutes. Once the onions are soft, add in the capsicum. Saute for a couple of minutes.

Add in the tomatoes. Add in the remaining salt, red chilli flakes and the cracked black pepper powder. Go easy on the salt as the veggies are already salted. We can adjust the seasoning later if need be. Cover the pan with a lid and cook for five minutes for the flavours to blend. Add in the veggies and mix well to combine. Finish with a lavish sprinkle of basil leaves.