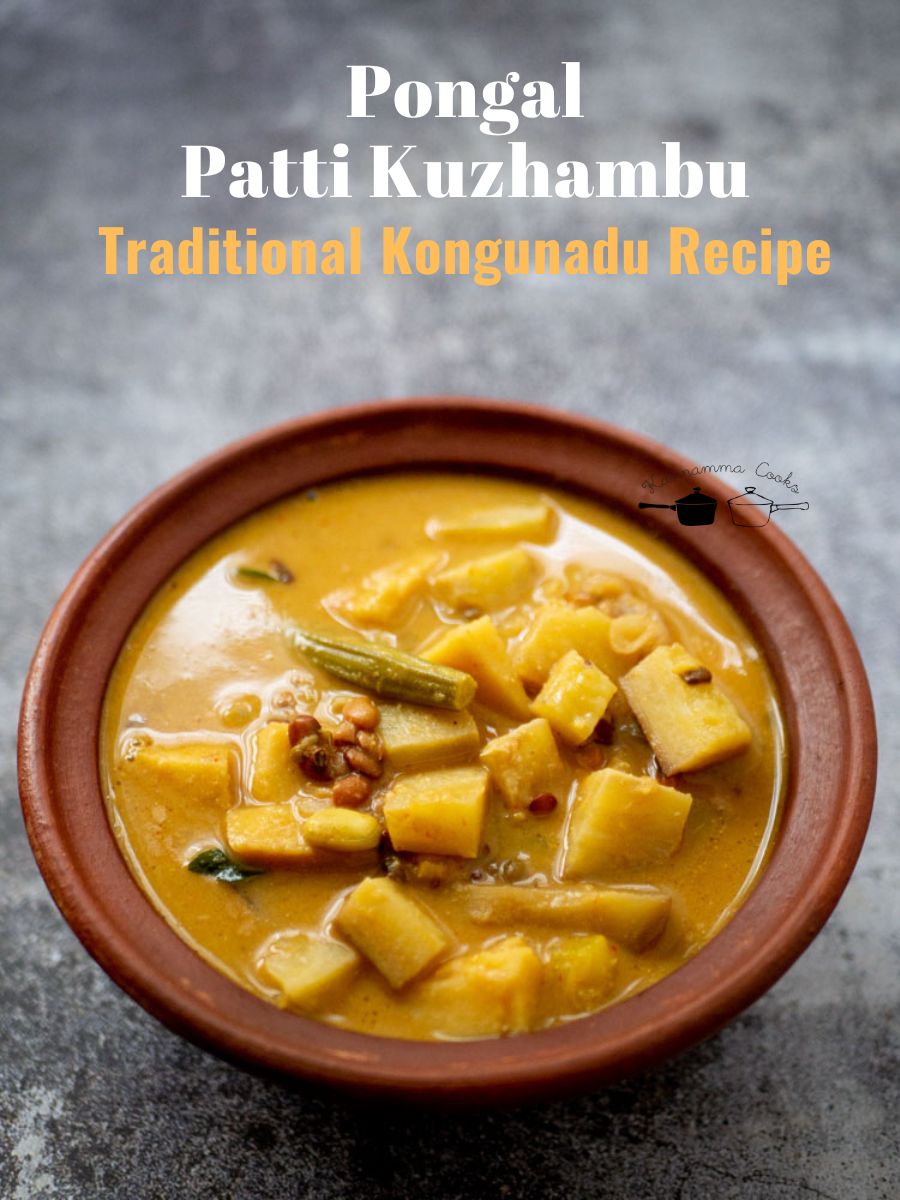 Recipe for traditional patti kuzhambu made during pongal celebrations in the region of Tamilnadu. Traditionally the kuzhambu / curry is served for lunch with rice.

Patti Kuzhambu is a vegetable lentil curry made during the harvest festival of Pongal in January. In villages of Tamilnadu, the second day of the festival is considered very important. It is called maatu pongal (cow pongal). It is celebrated mainly to thank the farm animals. The animals, mainly cows are bathed, horns are polished and painted, and the barns – whitewashed. On this day, Patti kuzhambu is made and served during lunch for everyone on the farm. “Patti” is essentially an Indian-style barn used for housing farm animals. On this day, the family and the workers on the farm come together to celebrate the festival. A communal meal is served. Before the meal, they say their prayers and thanks to the sun, and the animals and chant “பட்டி பெருகனும்” – “patti peruganum” meaning let the farm be blessed with prosperity for the coming year. 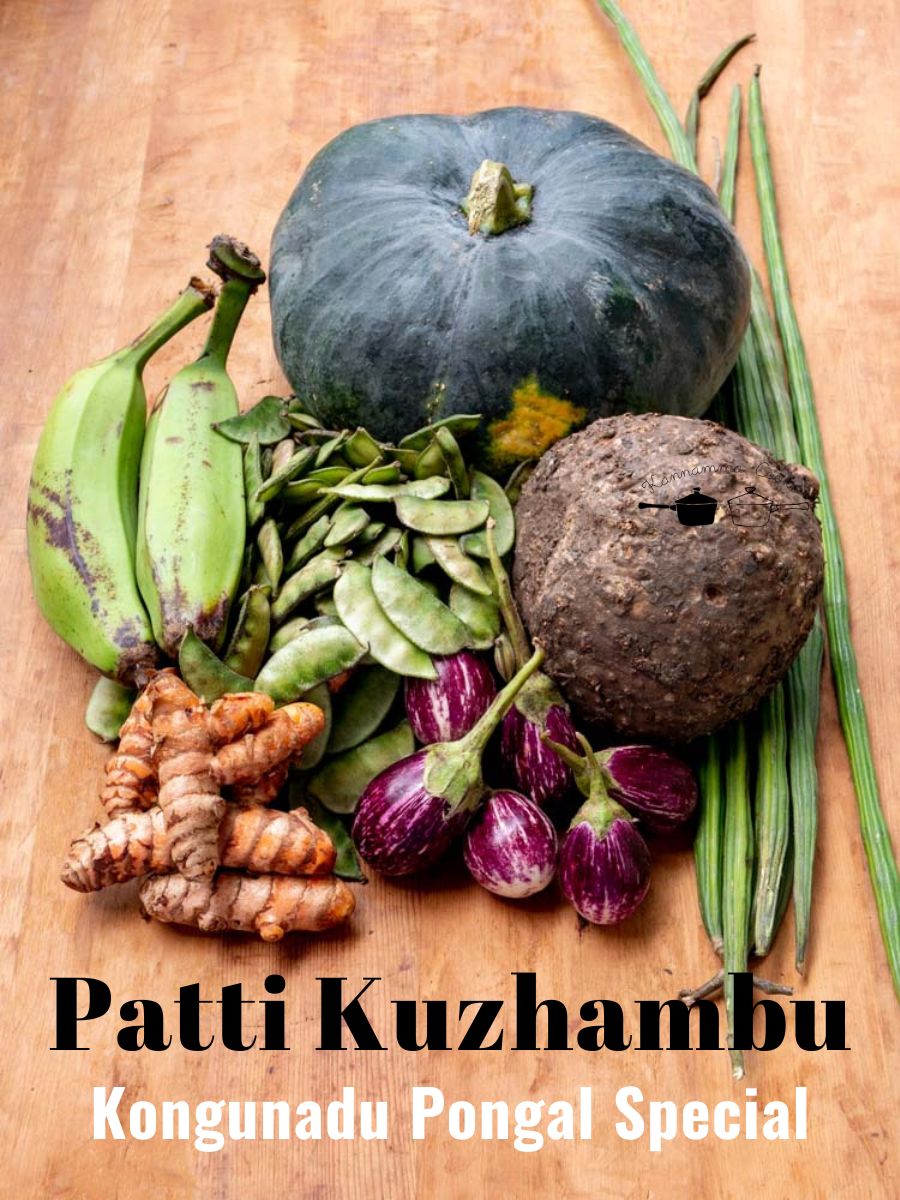 Patti Kuzhambu is made with grains and country vegetables. It is served with the season’s first harvest of raw rice. In Kongunadu, the main grains that are consumed throughout the year are horse gram, cowpea, and green gram. This curry is made with these grains and a variety of country veggies are added. A tamarind-coconut masala paste is added and made into a curry.

This recipe is made in four parts.

The Lentils
Predominantly native lentils that belong to the region like horse gram, cowpea, and green moong is used to make patti kuzhambu. 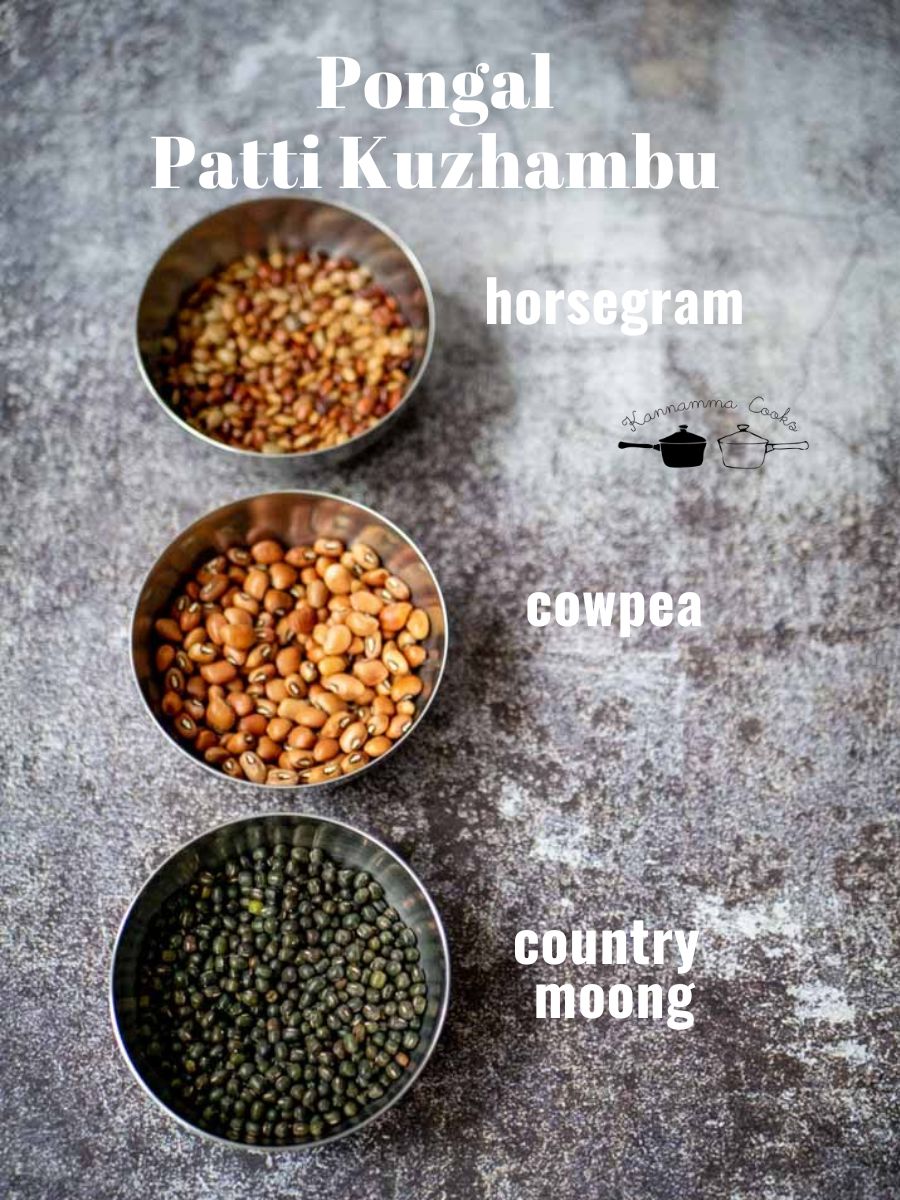 The Vegetables
Country vegetables that are usually grown on the farm are used for making this kuzhambu. Field beans / Mochai, Arasanikkai (yellow pumpkin) are available in plenty during the harvest season and are used to make patti kuzhambu. 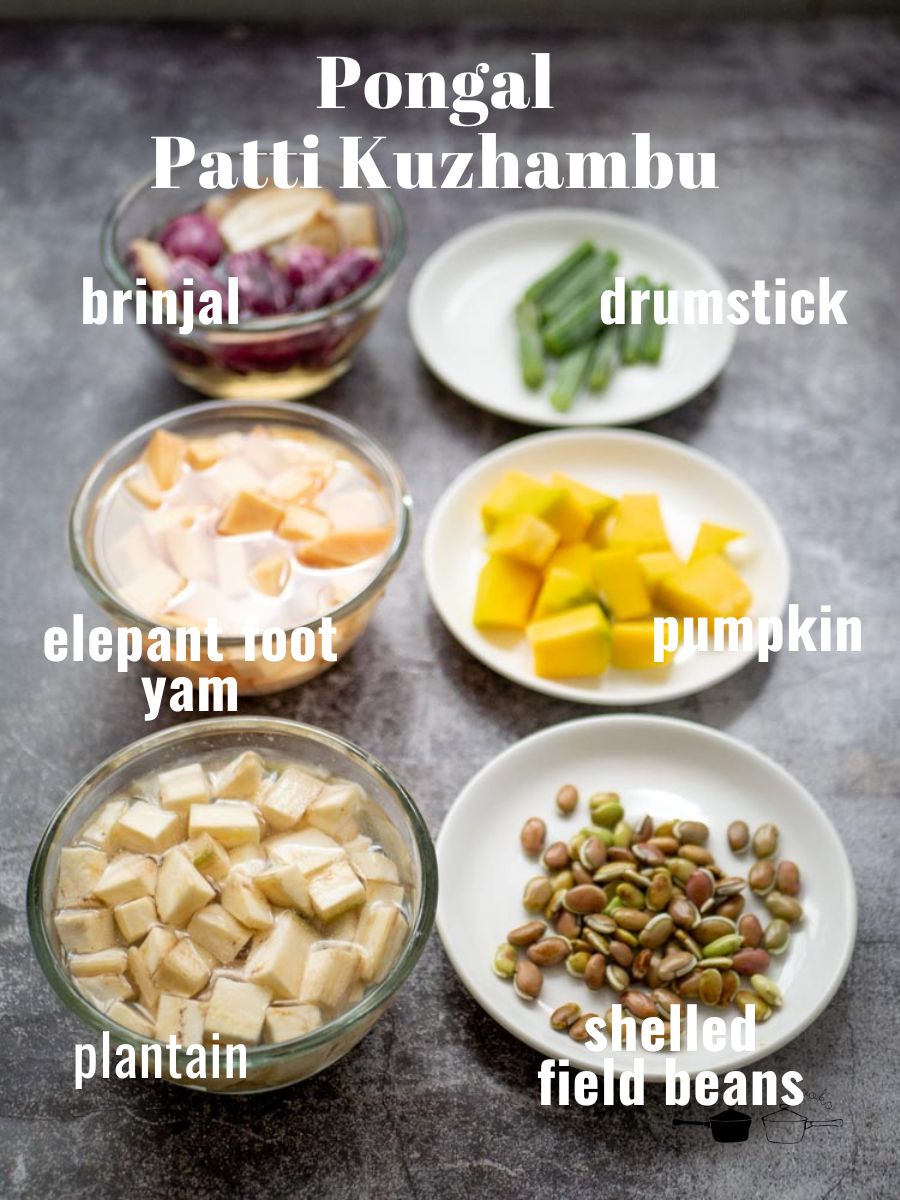 Aravai Masala
A masala paste is made by sauteing spices in oil. Shallots, tamarind and coconut are added at the end and ground to a smooth paste. This paste is what gives the kuzhambu its texture, thickness and flavour. 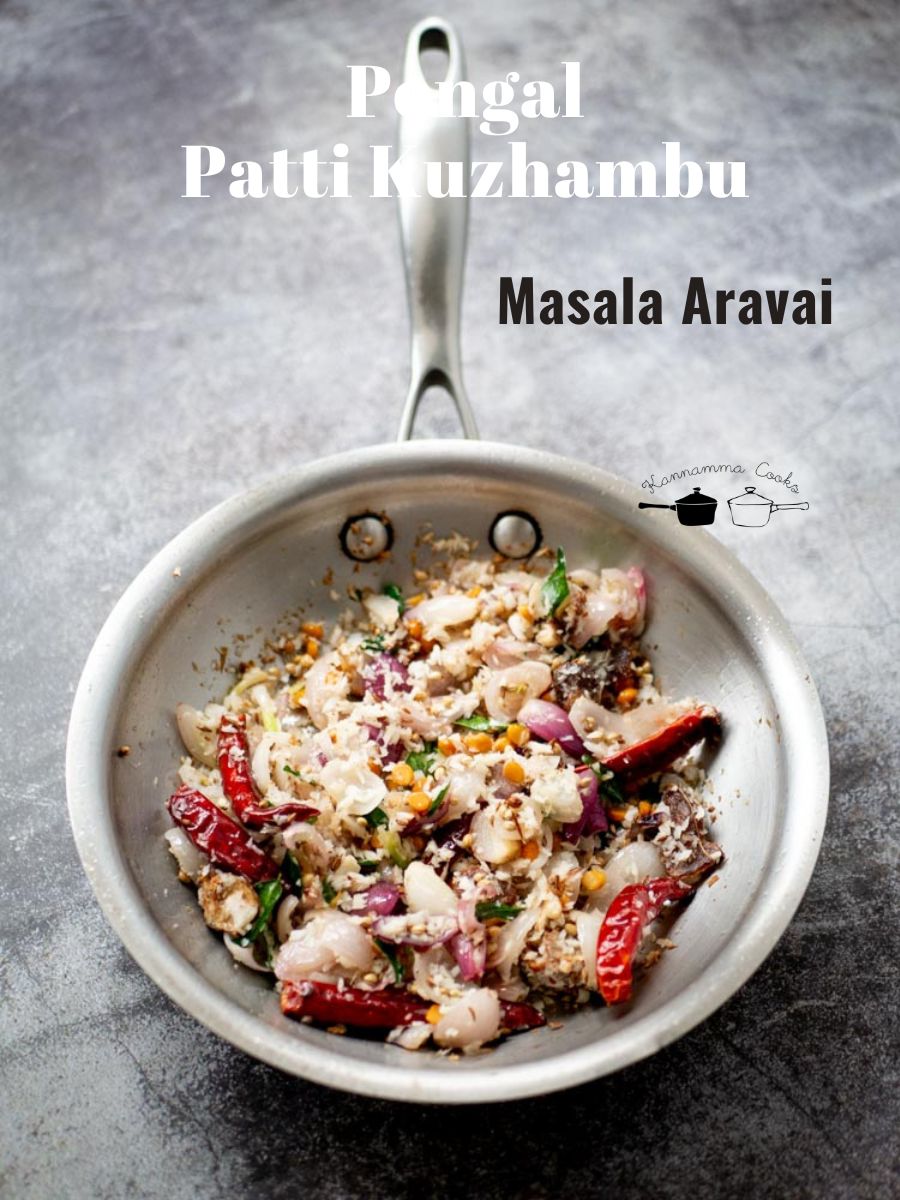 Tempering
Finally shallots are fried along with spices and added to the kuzhambu.

Here is the video of how to make Patti Kuzhambu 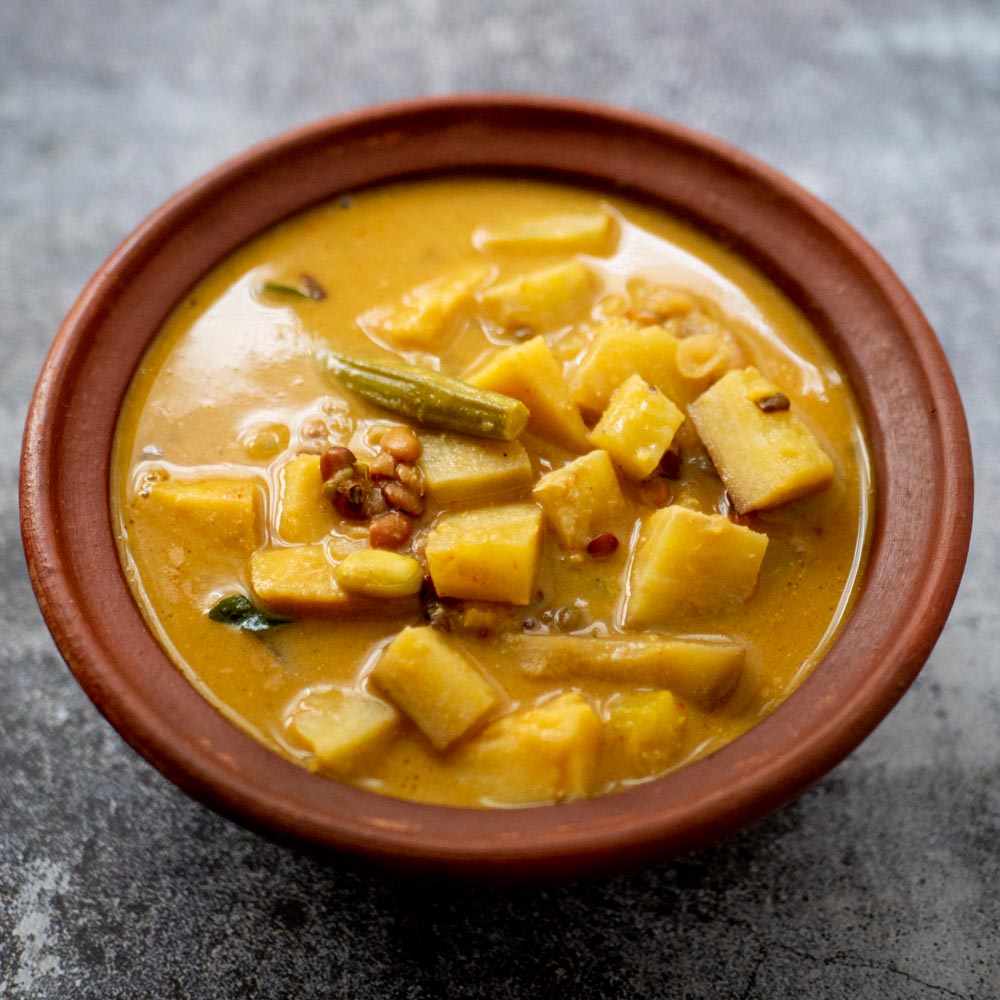 Vegetables and Other Ingredients

Wash and soak the lentils in water for about 30 minutes. After soking the lentils, drain the water used for soaking. Add the drained lentils to a pressure cooker. I have used a 3 liter cooker for this recipe. Add about 2 cups of water, half a teaspoon of salt, little oil and a piece of fresh turmeric. If you do not have fresh turmeric, you can omit it. Cover the cooker and add its whistle weight. Cook for 15 minutes on a medium flame. Ignore the number of whistles. After the said time, remove the cooker from heat and let the pressure settle on its own. Open the cooker and discard the turmeric used. Set aside.

Take a heavy pan and add in the vegetables and the cooked lentils. Make sure to chop the vegetables uniform in size so they cook evenly. Add little grated turmeric or dried turmeric powder and the salt. Mix well to combine. Cover the pan with a lid and cook for 10 minutes. After 10 minutes, the vegetables should be cooked but firm. At this stage, add the Aravai Masala. Add a cup of water and mix well to combine. Cover the pan and simmer the kuzhambu for 5 minutes. Finally, add the tempering. Serve hot with rice.

Here is how to make Aravai Masala

Add Indian sesame oil to a pan. Add in the chana dal and roast the dal on a low flame for a minute. Add the coriander seeds, cumin seeds, dried red chillies (adjust the chillies according to your taste), and curry leaves. Saute for a few seconds. Add the chopped shallots. Saute for a few minutes till the shallots are soft. Add in the tamarind and fresh shredded coconut. Roast everything for a minute. Remove from heat and let the mixture cool.
Transfer the mixture to a mixie. Add up to a cup of water and grind to a paste.

Take a small kadai and add in Indian sesame oil. When the oil is hot, add the mustard seeds. Let the mustard seeds crackle. Add the red chillies, curry leaves, and sliced shallots. Saute till the shallots are starting to brown. Once it’s lite brown, the tempering is ready.